Whew that is a heavy title. I’ve been catching up with the anime “March Comes in like a Lion” or “3-Gatsu no Lion” these last few weeks. I didn’t think just posting about how beautiful this anime was did the show justice or just saying the reason why I loved the show (which I do) was enough. This anime deals with issues of abuse and depression in a way that renders the heart a bit sore after watching. It is relatable and it is scary. It makes a person delve into their own life and puts depression in a visual way using themes of water and darkness. 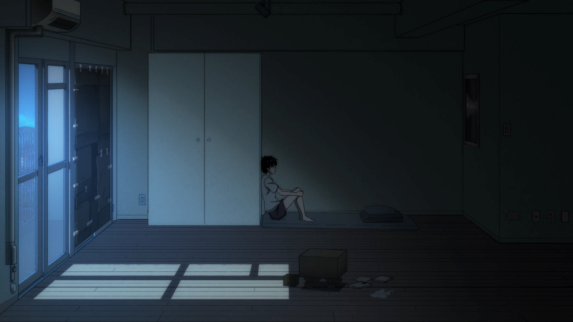 When you start the anime you see the main character Rei. He is a professional shogi player. From the start you see his isolation from people. His room is stark and usually dark. It is just him and the shogi board. He has isolated himself from people and he doesn’t let others in his life. We slowly learn that he has suffered from a lifetime of bullying and mental abuse. This anime takes care with these topics and doesn’t go over the top. It is real. It is something that we see on a daily basis or we have experienced ourselves. Harsh words said to hurt, to wound. 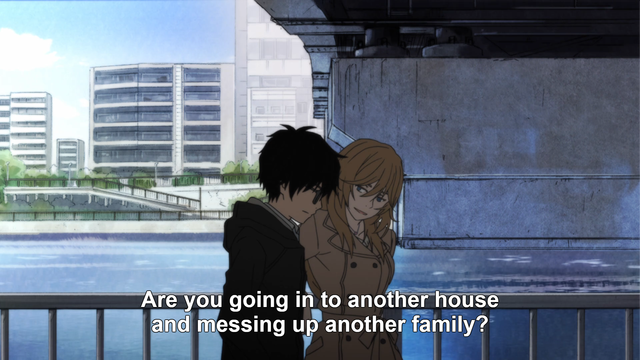 The main source seems to be from his adopted sister. He takes her verbal barbs and just stands in silence. We as an audience yearn for him to lash back at her. Then we start to see her story. She feels powerless in her own life and her choices so she seems to take it out on Rei. He is there for her, he lets himself be treated this way because he in a way blames himself for coming into her family. He thinks that it is his fault that the father started preferring him over his own children because he was good at shogi. So he takes her mental abuse. He keeps trying to save her, to get her out of the bad relationship that she continues to pursue. It is hard to feel sympathy for her, but then there are moments in the dark room and seeing her face that you truely hope that she gets out of this cycle.

Rei was also bullied in school not just at home from his adoptive siblings. After his parents died he began to isolate himself. Children wouldn’t sit next to him. They threw cans with rocks inside at him. He began to see shogi as something where he could have contact with people and then they would have to sit across from him. 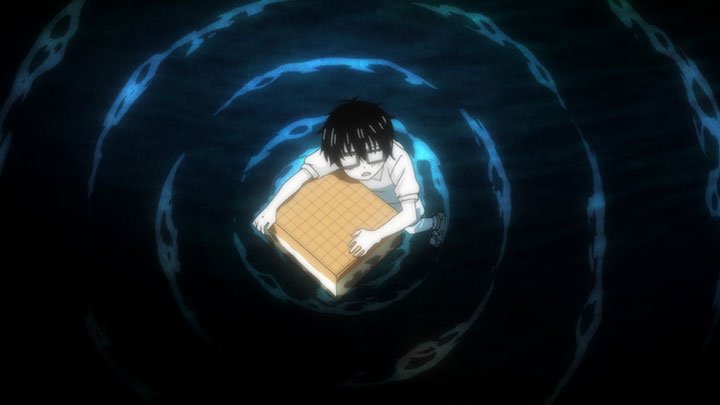 It comes with that theme of water and depression. Throughout the anime you see him falling/drowning in water another form of mental isolation. He sees himself alone but shogi is keeping him afloat. It looks to me like a love/hate relationship with a game that saves him yet isolates him from his adopted family.

There are moments that makes the viewer feel the anxiety and depression and the art shows it with water. In almost all the episodes there is water. It rushes in, floods Rei’s body and mind. It is suffocating. He gets overwhelmed any moment of peace that he may have can quickly turn to darkness.

In episodes that had multiple parts about lady bugs it started with Rei happy and peaceful enjoying food that he got before a match. Then all it took was the reminder of ladybugs to send him spiraling in memories of when he was bullied and isolated as a child. I found this episode to be so true to feelings of depression. You can be fine one minute and happy but then all of a sudden you are overwhelmed with depressing thoughts and anxiety. It happens when you least expect it, the flood, the water of darker thoughts.

The moments that this anime does really well is when the art takes over. The feelings are not just portrayed on the characters faces but the world around them. The brush strokes get wider and more chaotic with the emotion during certain powerful scenes in the anime. There is color or lack of color that speaks to the viewers soul that they watch. You can think, “Yes, that is what it feels like” the art gets the feelings of depression and abuse right. It is able to put these things in a visual format that I have never seen before.

From the start you may be thinking, “Man, this looks like one depression ride after another. I don’t think I could watch this.” Don’t worry that is another thing that the anime gets right. As much as Rei suffered from those in his life he has found a spot of warmth with three sisters and a lovable grandpa. 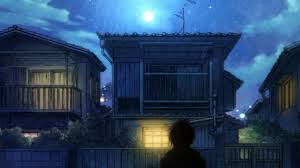 One night he was taken in like a stray cat by three sisters:  Akari, Hinata, and Momo. They give him the warmth and love that he craves. He still feels like an intruder sometimes in their world but they always welcome him and they worry about him even though they have problems of their own. Showing him nothing but love. (Bit of a spoiler for plot) In these last few episodes it was hard to see that one of his saviors, Hinata, is now being bullied in her school. This brings up issues that are very relevant to schools today and how they deal with bullying. 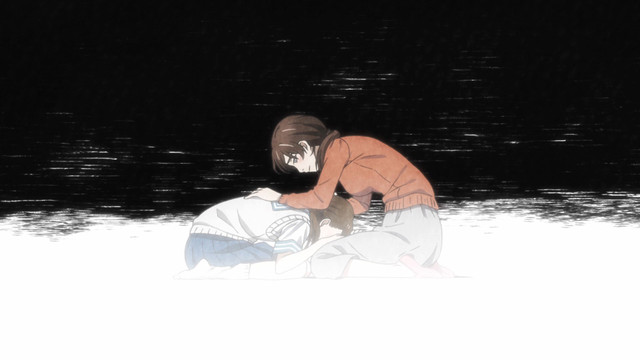 Hinata is a vibrant young girl in middle school and she stuck up for a girl that was being bullied by a group of girls. Then the girl moved away (and we find out later that she is in a recovery home) and now she is the one being bullied. This is hard to watch especially since I’m a teacher. How often does this happen and I’m not aware? Do my students feel safe coming to me and telling me if they are being bullied? I felt extreme dislike/hate for the teacher in the show and how she handled the abuse. If children can’t come to adults in school, who can they trust? A lot of adults are failing Hinata and it is hard to watch. Her grandpa gets it right telling her that she did the right thing standing up for the other student. 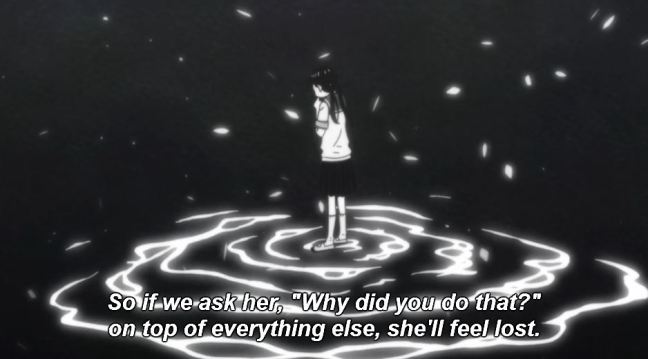 Right now the anime is in the middle of this story line and I hope to see others helping her letting her tell them what she needs. Rei is determined to help the girl who saved him and I enjoyed the moment where he is calmly asking her about what is happening at school and he just listens to her, letting her speak. 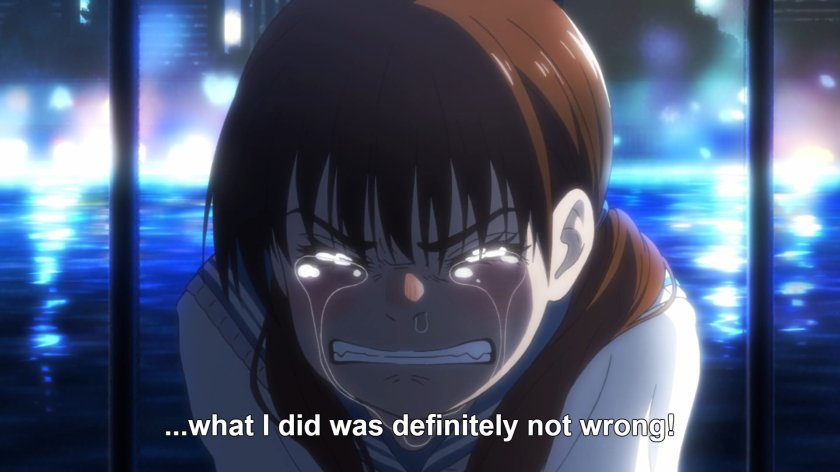 My heart breaks for this character who did the right thing and now is suffering. I’m angry at those who bully her and the teacher who did nothing.

This anime hits a lot of hard issues, but there are no sour notes. Throughout the themes of isolation, depression, and abuse it has those warm moments. This anime is as real as it gets. Nothing is overdone and I hope if you haven’t, that you give it a chance. Also there is an owl cat… 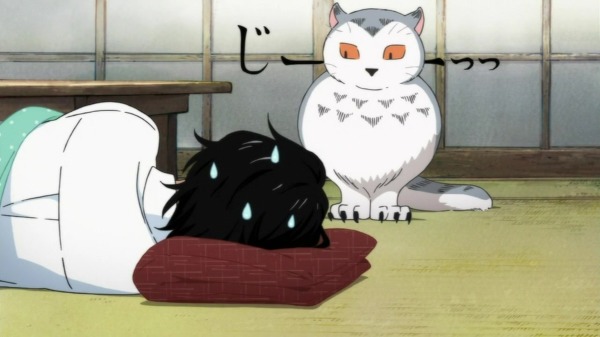 Beautiful art and compelling story. Give it a chance. Happy watching!