As I’m going through my To Be Watched list I’m getting through a lot of anime that I’ve had marked for ages. One of them was Inu x Boku SS, I tried watching this show before, but I fell asleep in the middle of the first episode… Yeah, so in my mind I thought that well, it must have been boring. I should know myself better and sometimes I’m just tired. People kept suggesting it to me so I put in on my list and in the end I really did enjoy it.

The main character Ririchiyo is so socially awkward that she pretends to be mean so she doesn’t get hurt. I can relate to pushing others away to protect myself. There are a lot of moments showing her being alone. This anime does a great job showing her growth and she sees that maybe she isn’t so alone after all.

She was born with magic and apparently that makes her so special that she was isolated from birth. In the end she decided to movie into this special apartment building with others like herself and they each get a special agent to watch over them.

Her agent is Soushi and he sparkles a lot… He likes to guilt trip her into letting him be at her service. Those moments are pretty funny and she doesn’t really know how to handle his undivided devotion to her.

So he slowly worms his way into her heart. Telling her that she saved him, but she has no clue what he is talking about. It makes for a nice reveal in the end and I thought it was tied up nicely in that aspect. 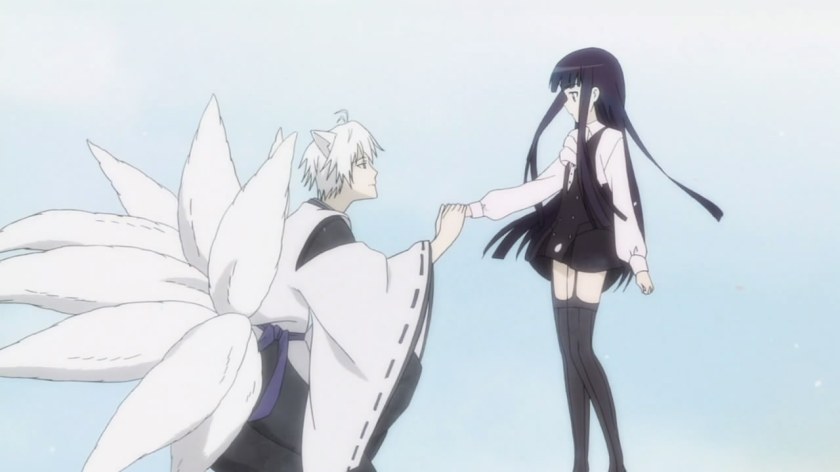 One of the great things about this anime is that there are a lot of unique character personalities and I wanted to know more about each of them. Sadly with only 12 episodes there isn’t much chance. I was satisfied with the ending and the manga is on my list to read.

Also with this anime I realized something about myself that I will probably make a whole entire post about in a bit… Soooo… Look forward to that….

In the end, this was a nice sweet romance and an enjoyable watch with a bit of humor. The characters all have pretty interesting backstories that make the world seem a bit tragic for those who are born with magic. This point is why I want to read the manga I think I want to see more of the characters and the world.